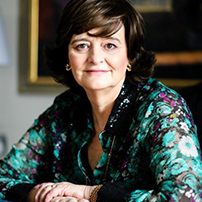 
Cherie Blair is a leading human rights lawyer, philanthropist and committed campaigner for women?s rights. In 2008, she established the Cherie Blair Foundation for Women, inspired by her experiences of meeting women across the world during her time in Downing Street as the wife of former British Prime Minister Tony Blair. The Cherie Blair Foundation for Women empowers women to build small and growing businesses in low and middle income countries so that they can contribute to their economies and have a stronger voice in their societies. Pioneers in using technology to drive women?s economic empowerment, a decade on, the Cherie Blair Foundation for Women has supported over 140,000 women across 105 countries. While still in Downing Street, Cherie helped establish Matrix, a ground breaking legal practice focusing on human rights and public law. Then as a successful businesswoman, Cherie set up Omnia Strategy, a pioneering international firm providing the opportunity for barristers, solicitors and non-lawyers to work collaboratively to counsel governments, corporate and private clients. As well as fighting for human rights in her professional career, Cherie is an active campaigner on equality and human rights issues. In addition to founding her own charity, Cherie remains closely involved with charities with a special emphasis on women and children. Cherie was awarded a CBE in 2013 for services to women?s issues and to charity in the UK and Overseas.