Xenia I. Loizidou graduated the Civil Engineering Department of National Technical University of Athens (Hydraulics Section, Harbour and Coastal Works Laboratory) and Imperial College of Science, Technology and Medicine of London (River, Estuary and Coastal Engineering). Since 1990 she has been working with issues relevant to Blue Growth, Integrated Coastal Zone Management, coastal erosion control, adaptation and risk management, climate changes, decision support systems, stakeholder involvement practices, development strategies, policies and action plans and others. She has been member of several European and international expert groups, consortia and networks and has worked in more than 40 countries. She is co-founder of ISOTECH Ltd Research and Consultancy?(www.isotech.com.cy), and of the NGO AKTI Project and Research Centre?(www.akti.org.cy). She holds several offices in Cyprus and abroad eg since January 2014 she has been appointed Member of the Board of Directors of the Cyprus Tourism Organisation. Since July 2014 she has been the first Cypriot woman to be accepted as member of the Women in Leadership ?Europe Network. She has received several international awards (recent: the Women Economic Forum Award ? New Delhi 2016: ?Iconic woman in leadership who contributes to a better world?). Since 2015, she is the first Greek Cypriot coordinator of the Technical Committee for Gender Equality. She is the author/co-author of more than 200 original technical reports and scientific papers. She is an active citizen with a long history in voluntarism and activism. She is married to Panagiotis Thanassas and she is the mother of two daughters. 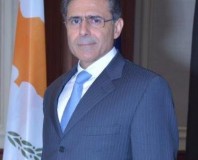 
High Commissioner Demetrios A. Theophylactou was born in Nicosia, Cyprus in May 1958. He was trained in University of Oxford, Harvard University and Washington State University, and possesses a B.A. and a M.A. degrees in Communication, and a Ph.D. in International Relations, Comparative Politics and Political Economy. Mr Theophylactou started his career as an Editor in 1982, and worked for both Cyprus and international media until 1990, including the Cyprus Broadcasting Corporation and CNN. He joined the Diplomatic Service of Cyprus as the Press Counsellor at the Permanent Mission of Cyprus to the United Nations in New York from 1994 to 2001. Between 2001 and 2002, he served as Press Counsellor at the High Commission of Cyprus to Australia. In 2004, he moved on to the Permanent Representation of Cyprus to the European Union in Brussels. Between 2009 and 2012, he served at the headquarters of the Minitry of Foreign Affairs as Department Head of Development Cooperation, Humanitarian Assistance and International Economic Organisations of the Division of European Affairs and Political Affairs respectively. In 2013, he became the Deputy Political and Security Committee Representative of the Civilian Management Committee of the Permanent Representation of Cyprus to the EU. In March 2015, Mr Theophylactou became the High Commissioner of Cyprus to India, accredited to Bangladeshm Malaysia, Maldives, Nepal, Sri Lanka, Thailand, Myanmar and Viet Nam. Apart from his diplomatic service, Mr Theophylactou also lectured and published widely on international relations and diplomacy.


Marina Neophytou is an Associate Professor at the Department of Civil and Environmental Engineering and Head of the Environmental Fluid Mechanics EFM Laboratory at the University of Cyprus She also served as the first Director of the Interdepartmental Graduate Program Energy Technologies and Sustainable Design of the School of Engineering 2012-14 During 2014-15 she has been a Visiting Professor at the Swiss Federal Institute of Technology - ETH-Zurich jointly hosted at the Department of Mechanical and Process Engineering and the Department of Architecture - Chair of Building Physics She completed her undergraduate studies BA-Honours and MEng degrees at Cambridge University UK at the Department of Engineering Fluid Mechanics Thermodynamics Division on a full-expense Cambridge Commonwealth Trust Scholarship 1993-97 During her undergraduate studies she has worked at the Schlumberger Cambridge Research Centre Cambridge UK and Schlumberger-Dowell Research and Production Center Paris France for which she has received the European Grant Award Women in Technology She has received her MA and PhD degrees 2002 in the area of Environmental Fluid Dynamics from Cambridge University UK on academic and industrial scholarships while during 2003-2005 she continued at Cambridge University as a post-doctoral research associate under an EPSRC UK grant to design and model a tracer release experiment in London for urban air pollution dispersion studies She joined the University of Cyprus as Lecturer in 2005 and then as an Assistant Professor in 2009 and since then she has attracted more than a million euros of external funding to the EFM lab Following a recently-approved proposal the EFM lab is leading a partnership with Cambridge University UK and Massachusetts Institute of Technology US on a Sustainable Built Environment Initiative During the Spring Semester 2009 she has been a UNESCO Visiting Research Fellow at Massachusetts Institute of Technology and Los Alamos National Laboratory US Her recent collaborative work Toward designing strategies for Urban Heat Island mitigation based on mutli-scale flow considerations has been awarded the Best Paper Award in the 34th International AIVC Conference Energy conservation technologies for mitigation and adaptation in the built environment the role of ventilation strategies and smart materials 2013 Beyond her scientific research she enjoys playing the piano dancing flamenco reading russian literature and poetry as well as being challenged through a chess game.


Anna Koukkides-Procopiou is affiliated as Research Associate and member of the Advisory Board, with the Center of European and International Affairs, University of Nicosia and has recently received funding by the State Department and the German Ministry of Foreign Affairs to complete a project on Gender and Inclusive Security, within the framework of the Cyprus Problem. Currently working towards the attainment of her PhD in leadership and crisis-management, she holds First Class degrees (B.Sc.) in History and Economics from University College London, with postgraduate studies at the London School of Economics (M.Sc.) on International Relations. She is also a recipient of the Executive Development Diploma for Professionals (mini-MBA) from the Cyprus Institute of International Management and various other professional business training qualifications, (including the Engel&Volkers Academy in Hamburg, Germany). She has in the past held a number of managerial positions in the Lanitis Group of Companies, one of the largest employers in Cyprus, later on serving as corporate consultant for a number of international and local clients, including the Bank of Cyprus. She has served as Project Manager for two EU-funded pan-European projects, Women Fit4Business and Gender Diversity in Decision-Making Positions and as an Executive Director on the Board of Directors of DIAS Media, a public company and the largest media house in Cyprus. An active member of civil society, she now serves her second term as President of AIPFE Cyprus- Women of Europe, which she also represents on the Board of the Cyprus Women?s Lobby. She is a member of Business Professional Women-Cyprus, a founding member of the Cyprus Literacy Board, as well as the founder and facilitator of two Lean-In Nicosia Circles, affiliated with Sheryl Sandberg?s Lean-In Org. She currently sits on the panel of judges for the Madame Figaro Women Awards, is a member of the Cyprus Advisory Board of the Global Entrepreneurship Network and a mentor for the newly-launched Impossible Pitch project for start-ups, having in the past served as team coach for the Young Entrepreneurs/Junior Achievement Project.


Dr Michael Loizides is the co-founder and Chairman of ISOTECH Ltd Environmental Research and Consultancy (www.isotech.com.cy), based in Nicosia, Cyprus. He is also one of the founders and Member of the Board of Directors of the Cypriot NGO AKTI Project and Research Centre (www.akti.org.cy). Dr Loizides is a graduate of the School of Chemical Engineers, National Technical University of Athens. He holds an MSc, DIC in Environmental Engineering from Imperial College and his PhD on waste management from the National Technical University of Athens. He has been member of several European and international expert groups and networks as expert chemical and environmental engineer. He has cooperated with international organizations and worked as an expert researcher and consultant in more than 45 countries. He is the author/co-author of more than 30 published papers in Scientific Journals and International Conferences, of books and of more than 1000 published Technical Reports in the fields of waste management, compost and co-composting, CEMP (Construction Environmental Management Plans), decision support systems and community annoyance. He is an external Associate Professor at the University of Cyprus (Department of Civil and Environmental Engineering) and the Frederic University of Cyprus. Recent honours and awards In 2014, Dr Loizides was appointed, by the President of the Republic of Cyprus, as the Head of the Technical Committee on Environment within the peacebuilding negotiations for Cyprus. In 2015, he was appointed by the President of the Republic of Cyprus, as Member of the Board of Directors of Cyprus Research Promotion Foundation. As a representative of the Cyprus Scientific and Technical Chamber, he is Member of the National Committee for the evaluation of Strategic Environmental Impact Assessments of the Republic of Cyprus. He represents Cyprus in several International and European Fora on environment and sustainability. Dr M. Loizides?s vision for a sustainable future centres on innovation coupled with participatory education. His concept of Tiganokinisi, an innovative project implemented in 350 schools in Cyprus since 2014, that focuses on the education of youth on recycling, reuse and financial sustainability through the collection of used cooking oils at schools and its conversion into biofuel, was ranked in the top 61 best practices in ELSEVIER?s 2015 Green and Sustainable Chemistry International Contest (out of 495 eligible nominations).