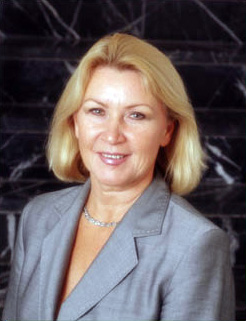 Tatyana Zrelova
The Committee of 20.
Russia


Director General, Joint Venture ?Dialogue? (a holding company including more than 30 branches of different types of businesses: computer technologies and IT, electronics and office equipment, real estate and construction, manufacturing and transportation, import and trading, distribution and retailing, financial services and others). Website: https://kom20.ru/68.html

Tatyana Zrelova
The Committee of 20.
Russia


Director General, Joint Venture ?Dialogue? (a holding company including more than 30 branches of different types of businesses: computer technologies and IT, electronics and office equipment, real estate and construction, manufacturing and transportation, import and trading, distribution and retailing, financial services and others). Website: https://kom20.ru/68.html 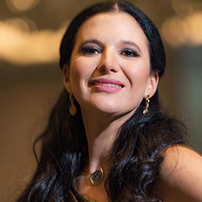 
Russian born, and London based renowned award-winning concert pianist who appeared at many international music festivals and as a soloist with orchestras such as the Royal Philharmonic Orchestra, Moscow Philharmonic Orchestra, BBC Big Band, Ensemble Modern among the others, Olga Balakleets is also a multifaceted entrepreneur and a CEO of international events company Ensemble Productions which organizers numerous cultural and philanthropic projects worldwide in the most prestigious venues such as the Royal Opera House, London Coliseum, Royal Albert Hall, Vienna Musikverein,Teatro della Opera di Roma, Frankfurt Alter Oper, Cairo Opera House, Dubai?s Madinat Jumeirah, Hong Kong Performing Arts Academy Concert Hall and many others. She is also a Founder and CEO of an international platform Creative Women since 2016 promoting successful female entrepreneurs with a creative approach to business and a Founder of a global multifaceted venture Theatrum Vitae which is designed to transcend barriers and unite people around the world through a unique synthesis of performing and visual arts and create a lasting cultural legacy for many years to come. Olga has been acting as an adviser on cultural matters to various governments and particular closely works with the Ministries of Culture of the Russian Federation, Cyprus and Hong Kong, with the Mayor of London, British Parliament, the Russian State Duma and the Presidential Palace of Cyprus. For her services she has been awarded prestigious awards including a Special Medal from President Medvedev (September 2010) and an Order ?For the Services to the Fatherhood? of St. Prince Dmitry Donskoi and St. Sergey Radonezhsky? (December 2010), the title ?Compatriot of the Year 2012? at the Moscow Forum of Compatriots, a Medal from ?Giornale della Danza? in Italy (2011), a Medal from the Russian Union of the Industrialists and Merchants ?For the Services to the Fatherhood? ( March 2013), the title ?The Russian Business Woman of the Year Award? in Cyprus (November 2014),The Inspirational Award at the First Feminine Capital forum in Cyprus (May 2017). Recently Olga has received a nomination for the highest Award for a Russian living outside Russia, the Pushkin Medal authorised by President Vladimir Putin which has been presented to her at the Russian Embassy in London in June 2019. In December 2018 has been awarded the Honorary Silver Order ?Social Recognition? by the Westminster Russia Forum and ?Social Recognition? National Fund in Russia for her contributions to the strengthening of friendship, humanitarian and cultural cooperation between Russian and United Kingdom. In November 2019 she has received a nomination for the Prix of Excellence award in Italy for her contribution for the promotion of ballet and dance. Olga often appears on international TV channels making valuable contributions on cultural and philanthropic matters and writes for several international publications in the UK, Russia and Cyprus. Since 2005 Olga has been an Artistic Director of the British-Russian Cultural Association, between 2008 and 2010 a Vice-President of the Swiss-Russian Cultural Foundation and in November 2009 she was elected as a member of the Russian Speaking Council of Great Britain to become its Head of the Culture Section there and in 2015 to become its Chairman. In April 2017 she was appointed the Secretary General of the Advisory Board of the Russian Speaking Council UK and in April 2019 was given a title an Honorary Member of the Russian Speaking Council UK. In October 2019 she has been invited to become the Arts Director of the Westminster Russia Forum where she has also appeared as a speaker.